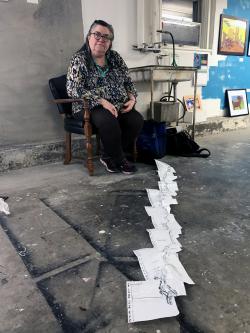 Ruth Van Order reached a tipping point during the winter of 2017. A growing list of weight-related health problems was mounting, becoming almost unbearable.

“I was having all kinds of back, hip and knee pains,” Van Order recalled. “I wasn’t able to walk very far. I was out of breath a lot. I couldn’t go up and down stairs.”

At 5’4”, she weighed 292 pounds, had been pre-diabetic for 10 years and her blood pressure was high.

“I knew something had to give,” she said. “I had to lose weight.”

After a life of caring for others – raising four children as a single mom and working as a home care nursing aid – it was time to take care of herself. Van Order took a nutrition class offered through the Community Health Centers of Benton and Linn Counties. That’s when she met Terry Deeds, RN, a care coordinator who helps patients manage their conditions, including diabetes.

Deeds encouraged Van Order to keep a written record of the food she ate as a way to help her take control of her health. Before, whenever she was unhappy, she would eat. Macaroni and cheese and casseroles were her go-to comfort foods.

Keeping a food log is a tool that many people have used to lose weight and keep it off. It helps them account for what they’re eating, add up calories and plan meals and snacks to meet nutritional needs.

“Terry encouraged me to write down the foods I ate and to keep track of my intake and watch my carbs,” Van Order said.

Deeds sees Van Order once a month to review her progress, which she tracks on graph paper, marking the pounds she’s shed.

“She was really motivated to control her health behaviors,” Deeds said.

She joined a water aerobics class at the community pool. She cooks most meals at home and even grows some of the ingredients, such as onions, garlic and strawberries.

A year later, Van Order has lost 38 pounds. Her blood pressure is lower and she’s no longer pre-diabetic. She’s added several pages to her weight loss graph and still keeps a daily food log. At 65, Van Order said she feels much better. She’s even resumed some of her hobbies, including a visual art project that was part of a recent community display at the Fairbanks Gallery at Oregon State University.

She’s proud of her progress.

“Being overweight was such a stress on me,” Van Order said. “I like to be able to move again.”

People around her notice the difference, too.

“Ruth feels so much better,” Deeds said. “She’s so much more motivated with her whole life.”

Her success has even influenced others.

“She’s a good example for her friends,” Deeds said.

To improve health, people need to eat right, exercise and not smoke. But there is no shortcut or easy way to lose weight. And keeping weight off is even harder, Deeds said.

“A lot of it is self-discipline,” he said.

And as Van Order learned, it helps to have the support and encouragement of a health care team.