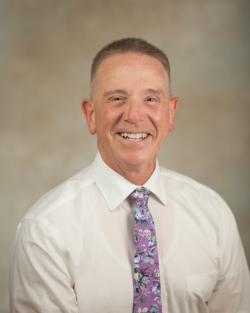 In his youth, Gary Stockhoff, the new Benton County Public Works Director, spent his summers tagging along on his father’s land surveying crew. One day he got a whiff of something strong. Gary asked his dad, “What am I smelling? It smells awesome!”

To this day, Gary is still somewhat fond of the smell of asphalt, and credits this early experience as his start on the path of engineering.

A native Oregonian, originally from Klamath Falls and raised in Roseburg, Gary was the eldest of three children.

After working for two Departments of Transportation, Gary took a break from the public sector and sold health and life insurance for two years. He even delivered pizzas when his wife worked nights at Straw City Pizza, a local pizza place in Carson City. During this time he developed strong presentation and networking skills, and discovered he loved working with people because he found it to be so rewarding.

After a few years, he returned to engineering when he took a position with a small city in California.

“When I went to work in California, I thought ‘okay, this is fun’ because I had contact with the public—that’s what I really like city and county government. Sometimes with larger government agencies, you lose contact with the people you’re serving,” said Gary.

He’s been with cities and counties ever since, most recently with Washington County, Oregon. In his first 90 days as the Public Works Director for Benton County, he says his return to a smaller community in Oregon feels like he’s coming home.

“Benton County is a great place to be. I’m thoroughly enjoying getting to know all of the folks in the department.”

“As the baby boomers retire, we have Gen Xers and millennials making up the workforce now. How we do business is changing. Everything from the expectations of our clients to how information flows inside the organization—it’s a different world that we live in and it’s exciting to be here during this generational change,” said Gary.

Gary and his wife will be relocating to Lebanon, and celebrated their 39th wedding anniversary. They have six kids, and just learned that their 17th grandbaby is on the way.

Join us in welcoming Gary and his family to Benton County.