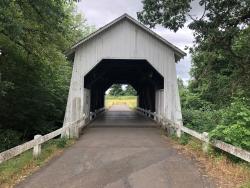 The Irish Bend Covered Bridge rehabilitation project is scheduled to go out for bid in September 2019, with construction to follow in fall 2019.

In order to bring the covered bridge up to a satisfactory state of repair, improvements include a minimum of painting, fumigating, and a new roof. These repairs will help limit the amount of damage to the wood structure because of water and/or bugs. The project also includes a fire sprinkler suppression system as the historic structure is located off-system and far away from existing fire hydrants, placing it at risk of vandalism. Other improvements include minor paving and miscellaneous structure repairs.

The estimated construction cost for the rehabilitation project is $305,000 that will include funding sources from the State Transportation Enhancement Discretionary Funds Federal Covered Bridge Preservation Program.

Through negotiations, an agreement was reached between Benton County officials and Oregon State University to reconstruct it on university property in Corvallis. The Irish Bend Advisory Committee raised over $30,000, with Benton County providing equal matching funds, for the relocation of the span. The bridge site crosses Oak Creek and is part of the Campus Way Multi-Use Path that travels through the research farm between 35th and 53rd Streets on the west side of campus. The Irish Bend Covered Bridge was relisted to the National Register of Historic Places in 2013 (it was originally listed in 1979, but removed from the list when it was moved from its original location).

The County has maintenance policies in place for each of the covered bridges; however, the Irish Bend Bridge is unique in that once it was removed from the system, gas tax funds could no longer be utilized for maintenance. Maintenance has been deferred since the 1990’s when it was originally re-located and continued deferral will lead to failure of this historic resource.