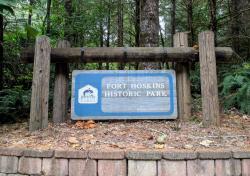 Presentations will be provided at the Commander's House, and again this year, the re-enactors of the Civil War will be in attendance with period clothing and armaments, including a cannon, which will be ignited on the hour from 10:00 a.m. to 2:00 p.m. A nature walk of the grounds will be led by a County botanist.

The event is free and open to all. A shuttle vehicle will be available to take visitors from the main parking area down to the houses. The Fort Hoskins living history schedule follows:

Fort Hoskins was established in 1856 to keep the Native Americans on the new coastal reservation and the white settlers from incursions in their direction. Two officers quarters and the Commander's House were built under the supervision of Phil Sheridan serving under Post Commander Christopher Augur.

The Fort was decommissioned after the end of the war and returned to area settlers. Most buildings, already deteriorating, were dismantled or moved. The Park Commander's House was moved about eight miles to the community of Pedee.

The area flourished until the 1960's with logging and farming, and even had a train system. Benton County purchased the property for a park in 1991 and opened it to the public in 2002. In 2012, with the assistance of AFRANA the County acquired the Commander's House through several grants and donations. The Commander's House was moved on two trucks to the site in October 2012, and has been undergoing exterior preservation and rehabilitation work by the County.

Future projects include work on interior, with the goal of creating the fashions of furnishings available to an officer of the Federal army. On-going research, beginning in the 1970's by Dr. David Brauner of Oregon State University, and recent investigations by Dr. Kathleen Bryant, have revealed much about the lives of the many who lived there before and during the settlement/Civil War years.