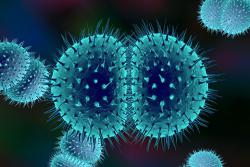 One of the major functions of public health is to monitor the health status of a community and protect against health hazards. Communicable disease investigation is a cornerstone of protecting our community against health hazards. A five step process is used for most communicable disease investigations.  This article will use meningococcal disease to illustrate this process.

Since November 2016, seven cases of meningococcal disease have been reported in Benton County. Meningococcal disease is an uncommon but serious illness caused by the bacterium Neisseria meningitidis. Even with modern medical treatments 10 to 15 percent of cases across the US result in death, and in 20 percent of cases, hearing loss, mental impairment and limb loss occur.

When someone feels ill and doesn’t improve, typically it will result in a visit to a health care provider. Usually it’s their primary care clinic, but in some cases it is an urgent care facility or the emergency room. After examining the ill person, a provider may order laboratory tests to make an accurate diagnosis.

There are roughly 50 diseases that providers, laboratories and hospitals are statutorily required to report to the local public health department. Meningococcal disease is one of those reportable illnesses. If laboratory results indicate the person is infected with one of these diseases, the physician and laboratory notifies the County’s public health division. Once the County health department is notified, the investigation team springs into action.

Public health investigators conduct interviews to learn who the ill person has recently spent time with to identify those who may be at risk of catching the disease. Developing that list of “case contacts”—individuals that were in contact with the ill person and may have been exposed to the disease—tends to be highly dependent on the ability and willingness of the ill person to communicate with health authorities. Investigators may need to check-in more than once while the ill individual is hospitalized or at home after being discharged. Each time investigators interview the ill person, they may ask similar questions but every interaction provides more information to get a better picture of the individual’s exposure. Individuals that are close to the ill person or family members can help fill in the picture, but most frequently the ill person is the primary information source.

Step 2 begins as soon as the County is notified of the infectious disease and remains ongoing throughout case investigation.

Step 3 begins when public health investigators reach out to “case contacts” identified during step 2 and assess their level of exposure and risk. For example, if the ill person attended a group gathering and provides a list of people that attended, Step 3 begins when health officials contact everyone at the gathering.

Health investigators interview each possible case contact to gather as much information as possible. One person may tell the health official that everyone “provided their own food” to the gathering, while another person may say, “I share my food with others and ate some of theirs too.” Each detail provides more information to determine the level and patterns of possible transmission, and which “case contacts” might have been exposed to the disease infecting the ill person.

Depending on an individual’s or group’s risk of exposure to the infectious disease identified during Step 3, specific health recommendations are then provided.

In the case of the recent meningococcal disease cases in Benton County, four recommendations have been made by county health officials in collaboration with OSU administration:

For meningococcal disease, the best option for preventing any new cases is vaccination. In the event that a new case occurs, best available science shows that antibiotics are an effective method for preventing infections among “case contacts” for two weeks following the date of possible exposure. This is why officials state the best method to prevent meningococcal disease is vaccination.

These five steps have been illustrated using meningococcal disease as an example.  Other disease investigations are similar but may differ in various details.  For example, who is at risk of exposure, the health recommendations made, the time period for ongoing risk, etc.

Mary Shaughnessy, Benton County Communicable Disease Nurse, primarily works in Steps 2 through 4 during a communicable disease investigation. Her role is to identify any connections to other cases, and identify any additional areas of concern. As she interviews “case contacts,” she looks for commonalities between the cases and the other case contacts. Mary’s background is in nursing and has been in her current position with Benton County since 2003. Because of her nursing background, she can work under the orders of the Benton County Health Officer to give vaccines and order antibiotics used to prevent disease in susceptible people.

Gerald Dyer, Benton County Communicable Disease Investigator, bridges the gap between infectious disease case investigation and high-level community health data. He is flexible in responding to cases as well as assisting in identifying high-level trends. Gerald’s background is in epidemiology and he is the most recent addition to the investigation team, joining Benton County in February 2018.

Peter Banwarth, Benton County Epidemiologist, reviews and updates community health rates through ongoing assessments. He supports the Healthy Communities team (another division within Public Health) with community engagement by providing outreach and education regarding community health data. When there is a particularly large or high-risk infectious disease investigation, Peter joins Mary in Steps 2 through 4 of the case investigation. Peter’s background is in economics, mathematics and statistics. He joined Benton County Public Health as an intern in the Public Health division and became the County’s epidemiologist in 2015.

The longer term monitoring and protecting of community health occurs through a Community Health Assessment (a periodic review of communicable disease rates and other health indicators). Updating this data on a regular basis allows the County to maintain awareness about new health concerns within our communities as well as throughout Oregon and the US and lets us know if there are any past health concerns that are no longer as prevalent.

Following the assessment, a Community Health Improvement Plan (CHIP) is developed. The CHIP guides how the Health Department assigns work and supports community initiatives to improve the health of all people who live, work, learn and play in Benton County.

The CHIP is currently under development and the public is invited to attend community input sessions. These sessions will include a presentation about the current state of health in the county and offer participants the opportunity to choose the highest health priorities for action.

The next sessions will be held:

Members of the public can also access a copy of the presentation and vote on their priorities by accessing the following links:

Results of the survey will be announced at the annual Benton County Public Health Week Awards and Recognition Ceremony in April 2018.