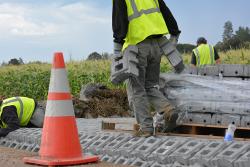 There’s a lot at stake when someone walks through the doors of Benton County Parole and Probation or the Juvenile Department.

Addressing behaviors that need to change benefits not only the individual involved, but also his or her family and the community at large. To achieve this, Benton County’s adult and youth supervision programs utilize the best practices to protect the community and prevent crime.

The adult and juvenile programs are administered separately, but share a common goal and employ many similar strategies and tactics. Each is strengthened through community partnerships and collaborations. And dedicated professionals at both agencies are committed to helping their clients succeed.

Benton County’s Juvenile Department supervises and rehabilitates about 100 youth under age 18 each year who are referred for crimes such as assault, harassment and substance use. Director Matt Wetherell has worked in the juvenile justice system for more than 20 years. He said there are three aspects to Benton County’s approach: accountability, public safety and teaching new skills.

The accountability piece addresses the choices that resulted in a crime being committed, as well as making sure a client understands the victim’s perspective. Sometimes, victims are willing to sit down and talk, which is a form of restorative justice.

“We’re not here to be punitive,” Wetherell said. “Kids certainly do go to detention. But it’s not our ultimate goal. We’re here to make sure they don’t do this again.”

According to the most recent data, the program is working to reduce recidivism, the term for when a person commits another crime. In 2015, the recidivism rate was 26.6 percent for Benton County, but dropped to 16.9 in 2016. Wetherell credits the work of Juvenile staff for the significant decline.

Additionally, the department works closely with area schools, running Boys Councils and Girls Circles at the high schools, preventive programs that build leadership capabilities. It participates in Teen Court and is involved with transition programs in the middle schools.

“Our staff is out there every week,” Wetherell said.

The Juvenile Department also works with families to address issues that may be contributing factors, such as trauma, mental health and substance abuse. Wetherell said the department considers what’s in the best interest of the whole family, not just the child. When a child is referred, parental participation is required. In some cases, that can mean parenting education. In other instances, the department is able to refer the family for additional services.

“We try to make sure they feel good about themselves,” Wetherell said.

That starts with being warm, dry and having a full belly. To that end, he keeps a loaf of bread and jars of peanut butter and jelly on hand at the office, as well as clean clothes and shoes.

Rehabilitation often involves therapy and sometimes drug and alcohol treatment. It can also cover things like how to balance a check book and life skills coaching.

“We are teaching them skills so they don’t commit new crimes,” Wetherell said.

Benton County Parole & Probation (P&P) is a division of the Sheriff’s Office, and is located in the Law Enforcement Center in downtown Corvallis. Services, programs and staff are funded through the state-wide Community Corrections Act every two years, with allocations based on a county’s percentage of the total population of people on probation or under post-prison supervision. Compared to elsewhere in Oregon, Benton County has a very small allocation percentage. For the current biennium the County’s allocation percentage from the state is 1.29 percent, according to Capt. Justin Carley, Director of Parole & Probation.

Carley has been with the division since 1994, and he’s seen many positive changes over the years. When he started out, his office was located at the front of the office. That space has since been converted to a meeting room for cognitive programming and treatment groups that meet regularly. These evidence-based programs were introduced by Carley’s predecessor and have continued under his leadership.

Each county parole and probation office has control over how it uses resources to supervise the offender population. Probation Officer’s use a validated risk assessment tool to address offender risk and need. They prioritize limited resources based on the highest risk to the community and use evidence-based programs and community partnerships to make the most effective use of resources. They provide the supervision, interventions, and accountability each offender needs to be successful.

“For the duration of time they’re here with us, we’re trying to understand the issues that are problematic,” Carley said.

In April 2016, an assessment was completed on two programs that P&P staff facilitate. The assessment is called Evidence-Based Correctional Program Checklist-Group Assessment (CPC-GA).  The CPC-GA provides a measure of program integrity and quality that determines how closely these interventions adhere to the principles of effective interventions.

Over 550 programs nationwide have been assessed using the CPC-GA. Only 7% of those programs have been classified as Highly Satisfactory. The P&P programs evaluated received an overall score of 78% on the CPC-GA, which falls into the Very High Adherence category. The CPC-GA report is a positive validation of the work that Benton County P&P staff are doing to adhere to evidence-based practices and implement evidence-based programming.

“You want to know that what you’re doing is the right stuff,” Carley said. “It was validation that the work of our staff adheres to evidence-based programming.”

In order to provide accountability for parole and probation violations, the division works closely with Benton County Jail staff. It can be tricky, due to overcrowding. Jail space must be prioritized, balancing all the needs of local law enforcement agencies, Carley said. Parole & Probation also partners with the Drug Treatment Court Program, which is designed to guide offenders identified as drug-addicted into treatment.

Work crew is another option for holding people accountable. In most instances, work crew is ordered in lieu of jail as part of a sentencing agreement or a sanction. Work crew is a partnership with the County’s Public Works and Natural Areas & Parks Departments that benefit the community.

Cases are assigned to probation officers based on a validated risk assessment assessment that identifies an offender’s risk to re-offend. A case plan is developed that addresses an offender’s risk and need and remains in place and is worked on while a person is on parole or probation. In general, resources and supervision are allocated to the offenders who present the greatest risk to our community.

Benton County works closely with counselors from state Department of Corrections so that the transition to the community can be as seamless as possible. This is called the reach-in process.

The Transition Team facilitates the reach-in process that consists of targeted client interaction to prepare releasing inmates from state prisons for long term and productive life change in the community. Participants in the reach-in process are educated on evidence-based principles related to risk assessments, available services and other community resources.

There are a lot of creative ways that probation officers can assist, such as finding housing, getting work certifications and applying for eligible resources.

“We’re trying to set them up for success as much as we can,” Carley said. “The goal is to protect the community by helping people become law-abiding, contributing citizens.”