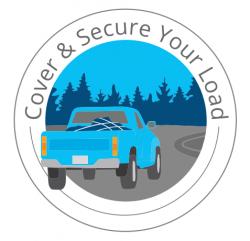 It is important to cover and secure you load, including when transporting materials to Coffin Butte Landfill, Republic Services Recycling Depot, or to donation centers.

Improperly covered and secured loads will be assessed an additional $10 fee at Coffin Butte Landfill.

As you transport a load in an open trailer, truck bed or car with an unsecured tailgate, there are variables such as: high wind speeds, abrupt stops and starts, and weight shift, that have the potential to cause material to fall or blow away from your vehicle.

When this happens, it not only adds to the roadside litter, which leads to public cleanup cost, but also can be hazardous.  According to a study released by the AAA Foundation for Traffic Safety, more than 200,000 crashes involved debris on U.S. roadways during the past four years, and nearly 37% of all deaths in road debris crashes resulted from the driver swerving to avoid hitting an object.

To ensure your load is fully covered and secure, follow these simple tips:

In recent years, Benton County has partnered with Republic Services to raise awareness and provide education to recognize National Secure Your Load Day. This year we have teamed up to increase those efforts, which include: