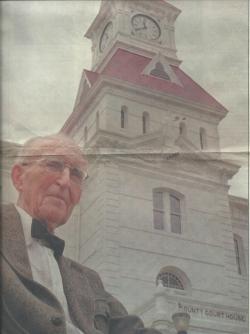 Richard Mengler saw the Benton County Courthouse for the first time when he arrived in Corvallis via bus in the summer of 1939.  It was in view across the street from the bus station, and he has said “When I got off the bus, there was this enormous courthouse.  That was my first impression of Corvallis.  I became impressed with that building, and that was the beginning of a life-long friendship with the courthouse.”

Born and raised in rural Nebraska, Judge Mengler’s career included teaching high school in Nebraska, serving as vice principal at Corvallis High School, four years serving in the army, graduation from law school at the University of Oregon, serving as city attorney for Corvallis, serving as District Court judge, teaching business law at Oregon State University, and becoming Circuit Court judge in 1965.  He retired in 1981 after 17 years of service as a highly respected Benton County judge and pro tem member of the Oregon Supreme Court.  He was recognized as an outstanding graduate of Nebraska’s Kearney State College in 1980.

Anticipating the arrival of the newly elected judge in 1965, an effort was made around the courthouse to focus on an “out with the old, in with the new” kind of modernization of the building.  Reflecting on when he first realized this was happening, Judge Mengler said “It really upset me to see old railings and paneling being ripped out and replaced with plywood.  I felt guilty that it was being done because of me.”  Thus began one man’s quest, behind the scenes initially, to preserve as much of the original courthouse as possible.  He believed that “It’s our heritage.  It’s our link with the past.”

There is a room bearing Judge Richard Mengler’s name in the courthouse, as well as a bench dedicated to him on the grounds.  While he greatly appreciated these honors, he described his true source of satisfaction in his relationship with the courthouse in personal writings done for his family.  “Without question, the high points of my almost quarter-century judicial career are not related to some great judicial decisions I made.  Rather, they are (1) having the clock strike after years of silence; (2) the flying of the flag atop the courthouse tower after an absence of many years; (3) hearing the carillon play; and (4) the 1979-80 restoration and renovation of the courthouse.”

Judge Mengler’s two children would often say that he had three children:  his son, his daughter, and the courthouse.