Some History of the Benton County Courthouse

The Benton County Courthouse is the oldest courthouse in Oregon still being used for its original purpose. Its design is called “Italian Villa with a military influence” and was created by Delos D. Neer a Portland architect of note. Mr. Neer had designed many public building in both Oregon and Washington, several of which are still being used today.

Construction began in the fall of 1888 on both the new courthouse and a jail immediately south of the new building. The foundation and basement walls were made of “superior quality gray granite” from the local quarry at Witham Hill.  The upper walls were made of locally produced clay brick.  The exterior was then surfaced with concrete made from sand found in Washington Territory and barged down to Portland, where it was then sacked and barged to Salem.  There it was transferred to a smaller barge and sent to Albany.  From there they were transferred on railway flat cars to finally arrive at their destination.

The interior finish was of fir and white pine and left in their “natural colors” until the 1920s then they were finally varnished.  The large stones supporting the front steps were shipped from San Francisco.

In addition to the boiler and hot water heat that were installed at the time of construction, almost every room had a chimney to which a wood burning stove was connected. The eighteen small chimneys that can be seen in early photos were removed around the time of World War I.  Piping for acetylene gas lights was provided and some of the pipe can still be seen in the first floor hallway.

The tower was installed soon after the building was finished.  Using heavy weights to power the clock’s movements meant the clock’s works had to be “cranked up” every week.  And falling weights damaged the building soon after the clock began to be used.  Today it is driven by a small electric meter. This tower also contains the old city fire bell which was tolled by rope which ran through the upper floors and down to the front staircase by the front door.

Partially occupied as early as May of 1889, the courthouse was substantially completed late the same year at a cost of about $70,000. It was a very impressive building for anywhere in the State of Oregon and proclaimed the hopes of the people of Benton County for a thriving future.  The May 1889 issue of “The West Shore” magazine stated as much when it remarked “with one exception the finest and most expensive (building) in the state . . . an ornament to the city and a credit to the county . . . This (in addition to the new school building) will give Corvallis better public buildings than any other town of its size in the Northwest.”

Originally the Circuit Courtroom had a floor to ceiling height of 24 feet, which was reduced in a later remodel to sixteen feet.  It occupied the entire area between the east and west wings of the building.  Ceiling detail consisted of a plaster radius with cornice at the edges and an ornate wood and plaster medallion at the center.  These details still exist in place and are generally intact.  The original window and molding details are still visible.

Some other noteworthy items that have long since disappeared begins with the sawdust that covered the courtroom floor, the paper Mache spittoons substituted for the sawdust in the early 20th century, and replaced again by brass spittoons which were removed in the 1950s. 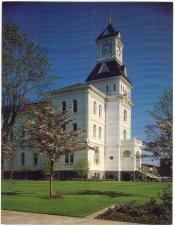 In the fall of 1976 the Benton County Commissioners and Judges retained the office of Cy Stadsvold, AIA, to conduct a study to determine the potential for renovation and “functional restoration” which would restore and preserve the historic character of the courthouse and provide a more functional set of spaces for the courts and other offices and functions.

The renovation construction was accomplished during the 1977-78 by General Contractor Bark Hess Building Contractor, Inc. from Portland, Oregon.  Additional space was added on the third and fourth floors including a room for the law library, District Attorney’s office and a lounge area within the clock tower.  Courtrooms were remodeled along with many of the offices and public areas.  A new electrical system, smoke detection system and central air conditioning were added for the upper floors.  In the basement a new vault was constructed.  Throughout light fixtures, woodwork and interior finished were carefully chosen in an effort to restore and reflect the original character of the Courthouse.

At a cost of approximately $869,000, the remodel project retained the historic building for public use as a courthouse which was estimated to accommodate county and court needs into the early twenty-first century.  Approximately 5,200 square feet of floor space was gained.  Also, the quality of the court environment was substantially improved.