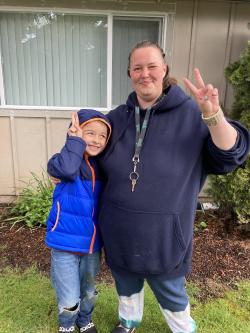 Sheena is a single mom who has been utilizing CHF’s case management services for a little over a year. Her and her son Sam (age 6) lost their housing in California and moved to Oregon in hopes of having a better chance in finding a place to live. They were unable to find housing and had no other options but to camp. Due to their housing instability, Sheena asked Sam’s grandparents on his father’s side if they could care for him until she was able to become more stable and get back into housing. They are now reunited and live in an apartment of their own.

How did you get connected with CHF?
After I got my son back from Texas, we came back to Corvallis because I like it here. We stayed in our van for a week. I was already working with a case manager I met at the drop-in center who helped me get an Emergency Housing Voucher. They helped us get into a hotel until a micro shelter became available for us. We stayed there until we got into our apartment. I’d been working on this for a while. I was determined to make something work.

How has CHF (or our case management services) helped you and Sam?
They’ve been tremendously helpful. If I hadn’t started on the process for this voucher, I never would have had the proof or back up I needed to show Sam’s grandmother. I needed to get her to trust me and to know I was in the process of trying to become more stable. Even though it did take a while to do, it still came together. And I was able to get support where I needed until other things worked out. Having my case manager talk to her and help confirm that I was trying is ultimately what helped me get Sam back. That is something I consider to be beyond what the job calls for, they didn’t have to do that. That kind of confirmation to a family member made a world of difference in whether or not I even got my son back. That’s why I appreciate the support system I had. I love it here. This place is my home. I’ve actually been able to make that a reality for the first time on my own. This is the first place that has actually given me enough confidence to show myself to people. And maybe that’s what I had to do in the first place, but it’s hard to do because of anxiety. And I am so much more than my anxiety.

How does continuing to work with CHF support you and Sam while you’re housed?
For me, it helps to really keep me feeling like I am a part of my community. I have to be able to show to the community that I am just as willing to step up as they are. On a family level for me and my son, it really helps when we need supplies. It’s not always easy. I still don’t have an income so getting basic supplies like toilet paper, garbage bags, and dish soap can be really hard. On the daily, we take for granted the small things and we don’t recognize how big they are until we’re in a situation like this when we can’t always afford to have them.

What would you like to tell others who have been homeless?
There’s so much. Just breathe and keep your head up. Because even though it feels like you’re going to drown, there’s always people to help you. As long as you’re willing to put your hand up and say “I need help.”

What would you like to tell the community?
Remember to love your local artists. Because their expression matters too. There’s a lot of the homeless community that are local artists right now. And it’s that kind of love that’s going to keep people going.

If this is a medical emergency, please call 911.