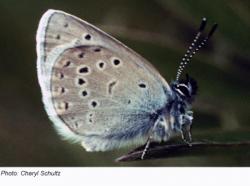 Fender's Blue butterfly was listed as an endangered species under the federal Endangered Species Act in 2000. Fender's Blue was actually thought to be extinct from about 1940 until the late 1980s, when biologists discovered a few remaining populations on prairie remnants in the Willamette Valley.

Fender's Blue butterfly is a member of the Lycaenidae family, and is in the Polyommatinae (blue butterfly) sub-family. Fender's Blue is a small butterfly with an approximately 1 inch wingspan. Upper wings are blue in males, and brown in females. The underside of both gender’s wings are creamy tan with two rows of black spots and a white border.

Adult butterflies lay their eggs on lupine leaves in May and June, and larvae (caterpillars) hatch out a few weeks later. The larvae feed for a few weeks, then go into diapause (similar to dormancy) at the base of the plant until the following February or March. Emerging larvae then feed on young lupine leaves and inflorescences. The larvae grow and develop quickly, pupate, and emerge as butterflies in early May.

Remaining populations of Fender's Blue are at risk from: