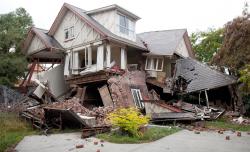 The severity of an earthquake is dependent upon a number of factors including:

Oregon and the Pacific Northwest in general are susceptible to three types of earthquakes:

Crustal Fault Earthquakes
These are the most common earthquakes and occur at relatively shallow depths of 6-12 miles below the surface. Oregon’s risk comes from slippage events within the North American Plate. When crustal faults slip, they can produce earthquakes of magnitudes up to 7.0. Although most crustal fault earthquakes are smaller than 4.0 and generally create little or no damage, some of them can cause extensive damage. Known active faults in the region include the Wallula, Hite, Mount Angel, and Lake of the Woods fault zones. Of the three earthquake types, crustal earthquakes are the greatest threat to Jackson County.

Deep Intraplate Earthquakes
Occurring at depths from 18 to 60 miles below the earth’s surface in the subducting oceanic crust, deep intraplate earthquakes can reach magnitude 7.5. This type of earthquake is more common in the Puget Sound; in Oregon these earthquakes occur at lower rates and have none have occurred at a damaging magnitude. The February 28, 2001 earthquake in Washington State was a deep intraplate earthquake. It produced a rolling motion that was felt from Vancouver, British Columbia to Coos Bay, Oregon and east to Salt Lake City, Utah.

Subduction Zone Earthquakes
The Pacific Northwest is located at a convergent continental plate boundary, where the Juan de Fuca and North American tectonic plates meet. The two plates are converging at a rate of about 1.5 inches per year. This boundary is called the Cascadia Subduction Zone (CSZ). It extends from British Columbia to northern California. Earthquakes are caused by the abrupt release of this slowly accumulated stress.

Although there have been no large recorded earthquakes along the offshore Cascadia Subduction Zone, similar subduction zones worldwide do produce "great" earthquakes with magnitudes of 8 or larger. They occur because the oceanic crust "sticks" as it is being pushed beneath the continent, rather than sliding smoothly. Over hundreds of years, large stresses build which are released suddenly in great earthquakes. Such earthquakes typically have a minute or more of strong ground shaking, and are quickly followed by numerous large aftershocks.

Ground Shaking Amplification
Ground shaking amplification refers to the soils and soft sedimentary rocks near the surface that can modify ground shaking from an earthquake. Such factors can increase or decrease the amplification (i.e., strength) as well as the frequency of the shaking. The thickness of the geologic materials and their physical properties determine how much amplification will occur. Ground motion amplification increases the risk for buildings and structures built on soft and unconsolidated soils.

Surface Faulting
Surface faulting are planes or surfaces in Earth materials along which failure occurs. Such faults can be found deep within the earth or on the surface. Earthquakes occurring from deep lying faults usually create only ground shaking.

Liquefaction and Subsidence
Liquefaction occurs when ground shaking causes wet, granular soils to change from a solid state into a liquid state. This results in the loss of soil strength and the soil’s ability to support weight. When the ground can no longer support buildings and structures (subsidence), buildings and their occupants are at risk.

Earthquake-Induced Landslides and Rockfalls
Earthquake-induced landslides are secondary hazards that occur from ground shaking and can destroy roads, buildings, utilities and critical facilities necessary to recovery efforts after an earthquake. Some Benton County communities are built in areas with steep slopes. These areas often have a higher risk of landslides and rockfalls triggered by earthquakes.

Oregon Emergency Management maintains a comprehensive page on earthquake hazards and preparedness efforts. They have several helpful publications including Living on Shaky Ground, a guide to surviving earthquakes and tsunamis in Oregon.

Play the Beat the Quake game and learn how to ready your home an earthquake.

How and When to Shut off Natural Gas (52 KB)