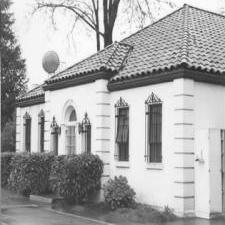 The first Benton County Jail was opened in 1856. It stood until 1929 and had a colorful history. In 1860 George Williams escaped using stove wood and part of the bed to remove the grating from the doorway between the cell area and the jailor's room. In 1892 Sheriff Osburn posted notices near the jail prohibiting conversing with prisoners through the windows, and in 1892 the Benton Grand Jury recommended that windows be enlarged, glass placed between the two sets of bars, and a water closet placed in the jail.

The second Benton County Jail was opened in 1929. The stucco and tile jail was razed in July 1975 when a new jail was built. During construction of the third and present-day Jail, inmates were temporarily housed at 360 Avery Avenue, now part of the Benton County Public Works office space.

The present Benton County Jail was opened on November 19, 1976 and is still in use. It was originally designed with a capacity for 27 offenders, a total size of approximately 8,000 square feet and cost about $800,000 to build. Both the Benton County Jail and the adjoining Law Enforcement Center were designed by architect Graham Braun of Vancouver, British Columbia, Canada with the help of many citizen committees.

The citizen planning committees purposefully kept the size of the jail small for several reasons. First, they felt that many lower-risk offenders, particularly misdemeanors, should be diverted from jail and instead maintained on supervised probation programs. They also envisioned that a regional jail network would be built by the Oregon Department of Corrections to house felony offenders sentenced to serve time at the local level and that a larger local jail would not be needed.

In the early 1970's, a small number of county jail offenders were occasionally housed in the now-defunct State Work Release Center in Corvallis and at the Forest Work Camp in Tillamook. Inmate lawsuits filed against the Oregon Department of Corrections for prison over-crowding coupled with the economic recession of the early 1980s brought an end to the state work release centers.

Oregon voters turned down funding measures that would have provided for a regional jail system. As needs for jail beds in Benton County increased, the 1976 Jail was reconfigured to accommodate 40 beds. A voter-approved levy provided funding to house an additional 40 inmates in jails in neighboring counties.